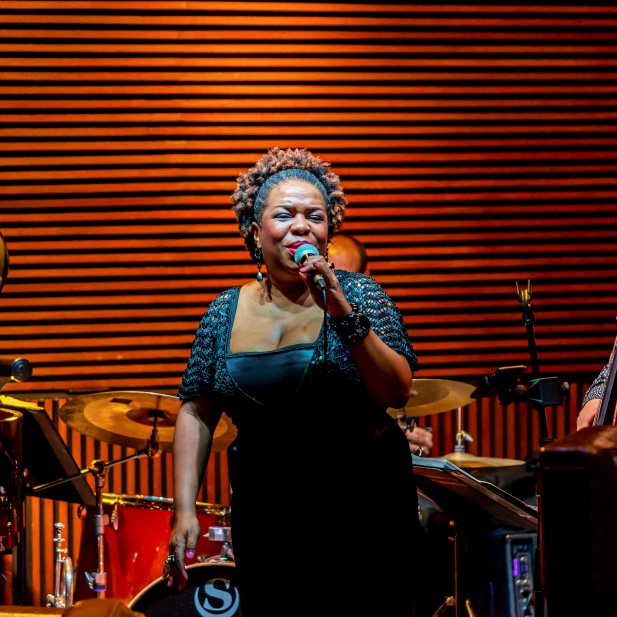 Coco was born in Washington, D.C. She won many awards for singing, as well as public speaking by the time she was 10. Her first professional paying performances came in middle school where she was hired to act, sing and dance in a Summer musical theater program (SAP).

Three years later, after touring Washington, D.C., Maryland and Virginia in musicals, Coco went on to become her High School Queen–Miss H.D. Woodson Sr. High in 1984! Wearing that crown made her believe that anything was possible. That is why she was overjoyed when she won a chance to go to New York City to sing at The Apollo Theater in Harlem! While it was an honor to be on television, it was knowing that she was singing on the same stage as Ella Fitzgerald and James Brown that excited her the most!

Coco has sung in over 21 countries around the world! Her audiences are captivated by her sultry lows, her powerful highs and her distinct style of delivering the American Standards. They say she sings her Jazz with Soul and her Soul in a Jazzy way! Coco began writing her own songs of which 3 have been released via Music Producers in Stockholm, Sweden, Tokyo, Japan and Turin, Italy.

Now, you can find Coco continuing her singing career at Jazz clubs, private social and corporate events in southeast Asia. When she is not performing, she is a “Performance & Career Coach” to Singers who are feeling stuck in their careers. Coco hopes to one day help make a super star!

Go to Top
This website uses cookies to improve your experience. We’ll assume you are ok with this, but you can opt-out if you wish.

This website uses cookies to improve your experience while you navigate through the website. Out of these, the cookies that are categorized as necessary are stored on your browser as they are essential for the working of basic functionalities of the website. We also use third-party cookies that help us analyze and understand how you use this website. These cookies will be stored in your browser only with your consent. You also have the option to opt-out of these cookies. But opting out of some of these cookies may affect your browsing experience.
Necessary Always Enabled
Necessary cookies are absolutely essential for the website to function properly. These cookies ensure basic functionalities and security features of the website, anonymously.
Functional
Functional cookies help to perform certain functionalities like sharing the content of the website on social media platforms, collect feedbacks, and other third-party features.
Performance
Performance cookies are used to understand and analyze the key performance indexes of the website which helps in delivering a better user experience for the visitors.
Analytics
Analytical cookies are used to understand how visitors interact with the website. These cookies help provide information on metrics the number of visitors, bounce rate, traffic source, etc.
Advertisement
Advertisement cookies are used to provide visitors with relevant ads and marketing campaigns. These cookies track visitors across websites and collect information to provide customized ads.
Others
Other uncategorized cookies are those that are being analyzed and have not been classified into a category as yet.
SAVE & ACCEPT